InsideWis: Wisconsin must step up to compete for federal R&D dollars 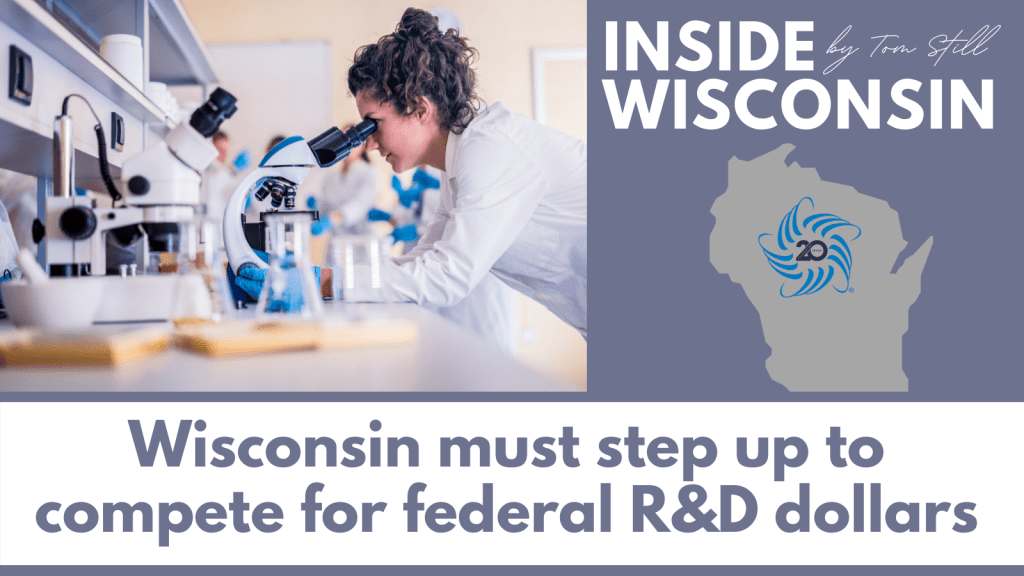 MADISON, Wis. – The federal government is poised to make its biggest investment in research and development since the end of World War II, the dawn of the space age and the Cold War defense buildup, with hundreds of billions of dollars to improve U.S. competitiveness in a changing world.

With one of the nation’s leading research universities, other academic research hubs and a vibrant manufacturing sector, Wisconsin should be positioned to vie for those dollars once approved by Congress and the president.

Absent more state investment in Wisconsin engineering centers at the heart of the federal effort, that might not be the case.

Federal research spending as a percentage of the gross domestic product has been slipping for decades. Although partially offset by increased industry R&D spending, the decline in basic and applied research has been noticeable in an era when the United States faces massive competition from China and other emerging powers.

A bipartisan group of congressional leaders proposed the “The Endless Frontier Act” in early 2020 to spend up to $100 billion over five years to boost science and technology research, revive American manufacturing and create innovation hubs nationwide. That proposal has morphed into the U.S. Innovation and Competition Act, which would do much the same by directing the National Science Foundation to focus on 10 areas viewed as most important to American security and prosperity.

It would establish partnerships between universities, government and industry, with 10 interdisciplinary research hubs to transfer science and technology into innovative goods and services while boosting metro, state and regional economies.

States around the country are gearing up for projects that could pair engineering schools and industry, but the dean of UW-Madison’s College of Engineering warned this week the state will be at a disadvantage unless there’s more investment in infrastructure needed to compete.

“If we don’t act soon, we’re going to lose out,” said Ian Robertson, dean of Madison’s 4,500-student engineering college. “Others are going to get ahead of us. They’re all gearing up to go after the Endless Frontier money. It’s that simple.”

The “act” part of Robertson’s statement stems from the Wisconsin Legislature’s decision not to fund a two-part plan to build the first new engineering complex on campus since 2002 to replace a research and instructional facility that dates to 1930. The state budget proposal to move ahead with the project over several years didn’t survive the final cut in the Joint Finance Committee. That same panel gave the go-ahead to another UW-Madison building priority and eight other projects in the UW System, but engineering was postponed.

Robertson told the board of directors of the Wisconsin Technology Council he hopes the project can be revived soon because of how other leading engineering schools are upping their R&D games.

It’s not just about competing for federal research dollars but attracting and retaining businesses that need research allies and are clamoring for engineering graduates. Enrollment is capped at Madison’s engineering school at 4,500, even though it could rapidly grow to 5,000 with the right infrastructure. With few exceptions, other Big Ten Conference schools have recently boosted the number of engineers they educate and place in the workforce.

Wisconsin has other well-regarded, research-oriented engineering schools, which could also be part of a consortium to attract one of the 10 research hubs to Wisconsin. Without a stronger UW-Madison at the core, however, such a consortium might not get as far in a national competition.

Lawmakers faced many tough choices with the latest state budget, especially in capital projects. Looking ahead, advancing plans that build economic value and jobs for Wisconsin should take precedence – sooner than later.