Madison.com: At Pyran, Kevin Barnett is out to replace petroleum with plants 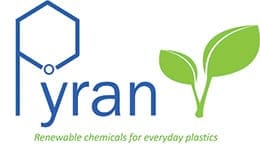 Kevin Barnett was in his fourth year of chemical engineering grad school at the University of Wisconsin-Madison when it hit him.

He was sitting in a room of around 80 engineering grad students at the Wisconsin Entrepreneurial Bootcamp, and the instructor had just asked the group to raise their hands if they’d ever started a company.

Somewhere between six and a dozen hands shot up.

“I just looked around, and I thought to myself, ‘What? People are starting companies out of grad school?’”

He’d already begun searching for jobs in his industry, and he’d never considered launching his own venture. But in that room full of raised hands, he recalls, “a light bulb went off: I have this great technology. It’s something that can be done. Why can’t I?”

He’d spent the last three years testing new ways to make renewable alternatives to petroleum-based chemicals. As part of a larger project his advisor George Huber was conducting with funding from the Department of Energy, Barnett was tasked with devising and optimizing a cheaper way to make a chemical called 1,5-pentanediol — 1,5-PDO for short — from corn cobs.