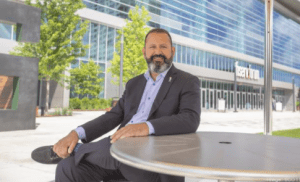 As the Milwaukee Bucks’ NBA Championship win was broadcast to the world last month — including to thousands of fans in and outside of Fiserv Forum — the franchise’s chief technology and strategy officer Robert Cordova was focused on ensuring that everything from the Deer District Wi-Fi to the on-screen graphics in the arena were operating smoothly.

In a recent interview with the Milwaukee Business Journal, Cordova discussed the future of the Deer District’s connectivity and how Milwaukee’s technology ecosystem can capitalize on the Bucks’ success. He also shared thoughts about investing in startups through a Milwaukee Bucks partnership with Green Bay’s TitletownTech and beyond.

What was the biggest challenge that you faced technologically during the playoffs?

“We have about $60 million worth of technology at Fiserv Forum and around the Deer District, and when you’re on the world stage, you don’t want that to fail.

“The biggest challenge was just staying on top of the needs of the different media groups that were there, the fans, the Wi-Fi, the cellular… ESPN was up on the balcony, they needed to have connectivity back to their trucks… So just really getting all that spaghetti of connectivity in place and making sure that if one of those links fails, the other link picks up.

“When it comes to operation technology, the measurement for it is invisibility – you don’t want to know that the technology’s there.”

Were there any close calls?

“There’s a lot of technology driving all of the video and the statistics that are on all those screens… We had a situation where one of the hardware boards that drives part of those screens failed. We have the high-availability backup board that goes in there without you even knowing it, but it was miswired… So one of the underbelly screens went off and we had to figure out pretty quickly what was going on. And at halftime, we made the fix. That was, I think, towards the end of the regular season.”