Attendees at the Nov. 9-11 Wisconsin Early Stage Symposium will use a top-ranked virtual platform to experience presentations, watch company pitches, compete for “door” prizes and network among themselves.

The vFairs software-as-a-service platform adopted by the Wisconsin Technology Council for the annual conference was recently ranked No. 1 in its class, according to Webbiquity. The conference is being held virtually due to the COVID-19 pandemic. Registration is now open. 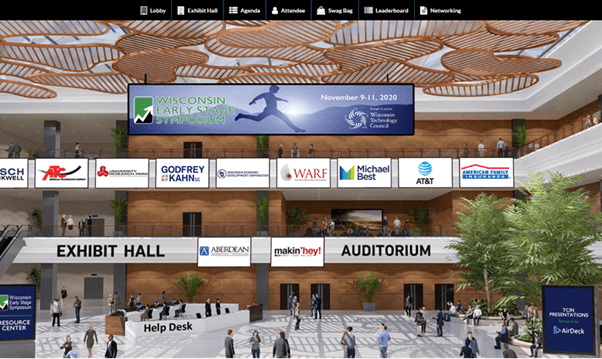 Attendees will enter through an animated “lobby” with navigation to conference events, sponsor booths, chat rooms and more. Those who register for the Early Stage Symposium will be able to compete for prizes, vote on major company presentations and return to recorded panel discussions and speaker remarks for up to three months after the conference.

A virtual briefcase allows attendees to store anything they see in the virtual environment and download it once the event ends.

Exhibitor booth representatives can engage with visitors via text, audio or video chats in real time. This interaction can happen via a group chat or through a one-on-one chat window if privacy is preferred. The booths can also host images, brochures, data sheets and play videos to help attendees feel almost like they’re attending in person.

“We’re proud to offer this highly ranked platform to those who may have attended the Early Stage Symposium live in the past, as well as those who will join us virtually for the first time,” said Tom Still, president of the Wisconsin Technology Council.