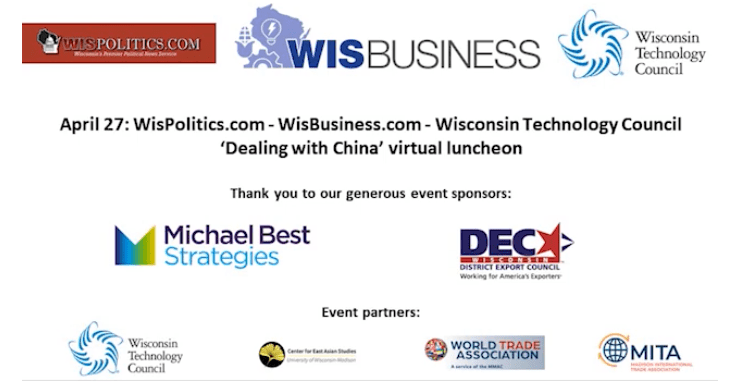 That’s according to panelists who were part of yesterday’s virtual WisBusiness.com-Wisconsin Technology Council luncheon on “Dealing with China.”

The bipartisan bill, co-sponsored by GOP U.S. Rep. Mike Gallagher, calls for $100 billion to build resources in advancing science and technology research and development nationwide. It also proposes expansion of the National Science Foundation and $10 billion for regional technology hubs. Those hubs would help to launch companies, revive U.S. manufacturing and create jobs that jump-start communities.

“The goal of the Endless Frontier Act is really to win the technological competition both when it comes to environmental technology, whether it’s carbon capture, whether it’s nuclear bioreactor technology or chips manufacturing,” he said. “In order to win the new Cold War, I believe we need to increase our investments in research and development from the federal level.”

The resource would be distributed across the country, including the Midwest and UW-Madison.

Steve Ackerman, the vice chancellor for research and graduate education at UW-Madison, said he’s looking forward to the infusion of resources to push science and research forward.

“I think it’s a great act in terms of what it’s attempting to do by instead of running away from China … actually funding the research,” he said. “Looking at China and other countries as adversaries and the way we’re going to beat them is to compete against them.”

Bonnie Glaser, director of the Asia program for The German Marshall Fund of the United States, agreed that the Endless Frontier Act is important. She described China as both an adversary and a potential ally as the country seeks to dominate high technology, weaken U.S. alliances and make it costly for the U.S. military to operate in Southeast Asia. But China could be a partner in fighting climate change and handling Iran, she added.

Glaser said the Biden administration is currently going through the policies it inherited from the Trump administration, and so far, it looks to her that the president is on the right path. She cited the current administration’s interest in multilateral trade approaches, and returning to the United Nations, the World Health Organization, the UN Human Rights Council and the World Trade Organization.

But tariffs on China haven’t budged. U.S. Rep. Ron Kind, D-La Crosse, said an increase in export opportunities will be crucial to production agriculture — a powerhouse industry in Wisconsin that experienced record bankruptcies due to excess surplus and nowhere for it to go.

Kind said he wants to see the U.S. go back to the Trans-Pacific Partnership trade agreement.

“That is the fastest growing economic region in the globe today — the Pacific Rim area,” he said. We’re on the outside looking in, and we were the principal negotiator of that trade agreement. The structural reforms that we’re demanding China to make on the trade front and economically are all embedded in that TPP agreement.”

Gallagher said the 301 tariffs were justified because of China’s predatory trade practices. He takes issue with the 232 tariffs put on U.S. allies — steel and aluminium tariffs that also impacted the ag sector.

“That is one of our secret weapons in this competition is we have a whole network of friends and partners and allies … We have to find a way to work with them to push back on China and I think we can do that in a way that benefits Wisconsin farmers,” he said.

Now that the USMCA disagreement with Canada has been resolved, Gallagher is pushing for a bilateral trade agreement with the U.K. now that it has left the European Union. The agreement would have the potential to set high trade standards that other countries could sign onto.

Glaser said the 301 tariffs on China cost the U.S. just under 1 percent of GDP and countless jobs.

“I think that the Biden administration is taking the right approach that we should see these tariffs as potential leverage and use them in negotiations with China to get the kind of statements and actions that we want from China and be sure that we can enforce them.”

Here is a link to the video of the event: https://www.youtube.com/watch?v=6jwn7ek8JfU

WisBusiness.com has a new trade policy page to help you track events, news and developments that affect trade and the economy in Wisconsin and the Midwest: https://www.wisbusiness.com/trade-policy/