WisBusiness: Wisconsin cities capable of alluring talent from the coasts 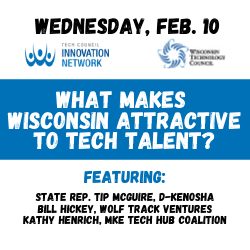 Wisconsin’s cities, which feature a low cost of living and emerging downtowns, are attractive to talented workers looking to leave the coasts, tech industry leaders say.

A trio of stakeholders in the state’s technology sector participated in a Wisconsin Technology Council virtual event yesterday to discuss the state’s ability to attract tech talent.

High costs of living, which include skyrocketing rent prices, and the low chance of homeownership have contributed to a growing demand from tech employees to work remotely or in-person in places other than Silicon Valley, Still said.

“They want to be somewhere that the rent isn’t so high,” said state Rep. Tip McGuire, D-Kenosha and co-chair of the informal Tech Caucus within the Legislature. “They want to feel comfortable being out in the community.”

McGuire, who represents parts of Racine and Kenosha counties, said his district alongside La Crosse and Eau Claire are cities that have emerging downtowns. The cities have places to eat and shop, and feature attractive and alluring city centers for millennials and mid-career tech professionals alike.

“One of the trends we’re seeing is there are people moving back from the coasts,” said Milwaukee Tech Hub Coalition CEO Kathy Henrich. “Most of them are mid-career folks, they have strong skills, strong connections nationally but they also have a strong local connection. We have the opportunity to reach out and pull people back.”

The panel added that low costs of living, abundant state parks and natural lands, and diverse industries all contribute to Wisconsin’s position as an emerging tech center.

Henrich also argued that Wisconsin needs to shed its state-next-door persona and pursue an aggressive marketing pitch to out-of-state prospects about why the Badger State is the best place to work, live and play.

“There’s this requirement to tell our stories,” Henrich said. “Naturally, Wisconsin tends to be humble — this is not a time to be humble.”

Bill Hickey, president of Wolf Track Ventures which straddles both Wisconsin and Minnesota, agreed with Henrich and proposed that Wisconsin should reevaluate its image.

“I might suggest that the state reconsider and relabel,” Hickey said, referring to the state’s current identity as a major food producer in the dairy industry.

Hickey said Wisconsin should reevaluate its image and go further in describing how the dairy industry can interact and intersect with technology.

“A little bit of bragging would help in this situation right now,” Still said.