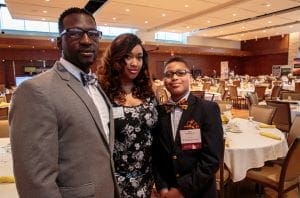 In 2018, Alex Hart-Upendo took home the grand prize with his company Build-A-Bow. Build-A-Bow is a custom eco-friendly bow retailer specializing in bow ties, hair bows and bow ties for dogs. Hart-Upendo founded Build-A-Bow when he was just 9 years old.

Hart-Upendo applied because it was recommended to him by his mentor. After overlooking the criteria, the then-fifth grader felt he had a chance at winning.

He told WisBusiness.com that the competition helped connect him to several other small businesses and entrepreneurs statewide.

“The partnerships I was able to build, and people I connected with throughout the competition was priceless,” he said.

The winning incentives helped Build-A-Bow purchase an expensive piece of machinery used to quicken production time and simplify the process.

“I would recommend this competition because the application isn’t too evasive or confusing, and the connections and incentive could really help put any small business in a better position,” Hart-Upendo said.

Build-A-Bow is a finalist in the Force for Positive Chance competition. Hart-Upendo is also working on expanding outside of Wisconsin into a franchise.

Public, private and home-schooled students across Wisconsin are eligible to turn their science- and tech-related ideas into business plans and compete for cash and prizes.

The contest begins with a 250-word summary submitted through WisconsinYES.com. Entries that advance to the second phase of the competition will expand their idea into a 1,000-word executive summary. Throughout the process, students get feedback from professionals across Wisconsin who will serve as judges.