The Wisconsin Air National Guard’s 115th Fighter Wing has awarded the first of many building contracts to a local construction company in anticipation of basing a squadron of F-35 fighter jets at Truax Field in Madison.

J.H. Findorff & Son was awarded the contract for th 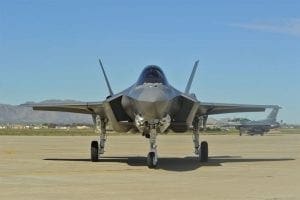 e $9 million project scheduled to begin in May and last roughly 18 months, Senior Airman Cameron Lewis said Friday. The project includes the demolition of a 4,646-square-foot space and the construction of a 19,000-square-foot, state-of-the-art F-35 flight simulator facility.

“Being able to fly in a virtual environment is a huge step towards the success of the F-35,” Col. Bart Van Roo, commander of the 115th Fighter Wing, said.

Lt. Col. Charles Merkel, vice commander of the 115th Fighter Wing, said the simulator facility is going to be a “critical component of the F-35 mission.” He said simulators will be used for initial pilot training and continuation training.

Simulators give pilots the chance to train in various scenarios and in some cases can replace actual flight time, Lewis said. The training provided by the simulators could ultimately decrease the number of actual takeoffs and landings at the Madison base.

The contract is the first of 19 military construction contracts, which will provide more opportunities for local companies and subcontractors. The 115th Fighter Wing expects to award close to $100 million in construction projects.

“Findorff is an apt partner in this project given its long roots in Madison, dating back to 1890 when it helped construct the now iconic Red Gym, which was originally a military training facility,” Lewis said. “The simulator facility will be the keystone project for the 115th Fighter Wing’s F-35 training mission.”