Karen Renee and Judy Gerulat like to say they approach their business the same way they ride their motorcycles: There’s no reverse. 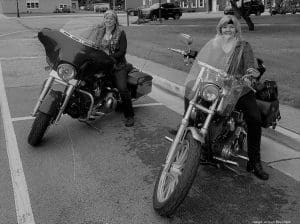 The pair — who became fast friends more than 20 years ago after bonding over their Harley-Davidson bikes — went into business together in 2017 with eCourt Reporters, an online platform for scheduling legal support services.

Renee, a court reporter herself, founded the business to solve scheduling inefficiencies she noticed in the industry. Gerulat, who previously worked in local government, couldn’t believe a solution hadn’t already been created and signed on to help.

“We met each other through that same common love of riding our own motorcycles,” Gerulat said. “I knew that (Renee) was a strong independent woman because of that.”

Renee and Gerulat worked with a team of developers to build out the eCourt Reporters platform, which enables users to schedule court reporters in minutes instead of the up to four hours it otherwise takes most paralegals, according to a survey by eCourt Reporters.

eCourt Reporters, which is based in Burlington but serves users nationwide, currently has 2,000 registrations across 49 U.S. states — including more than 1,600 court reporters and videographers, and around 350 schedulers, Renee said. Once users register, eCourt Reporters puts them through a vetting process.

eCourt Reporters has participated in various local entrepreneurship programs, including gener8tor’s gBETA accelerator, Project Pitch It, and the Wisconsin Governor’s Business Plan Contest, in which it was this year’s business services category winner.

As it looks to rev up its growth, eCourt Reporters said it plans to hire a sales and marketing team, and get all of its active court reporters working at least three jobs per week. It also intends to expand to other legal support services such as process servers, scopists, proofreaders and interpreters.

“We knew quickly that it’s not just a local thing,” Renee said. “This is special and it’s going to be nationwide and we’ve already been asked to go international.”