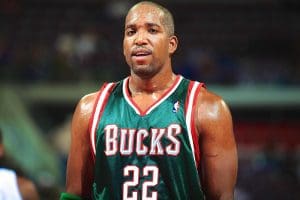 Michael Redd‘s interest in the venture capital world was first sparked during his All-Star NBA career, but after nearly a decade working in VC, something didn’t sit right.

The former Ohio State University and Milwaukee Bucks shooting guard teamed up with John Weaver, an attorney specializing in startup clients, to form 22 Ventures LLC, doing business as TwentyTwo. They aim to upend the VC model: Invest in and support entrepreneurs to build stable companies, instead of expecting an 80% failure rate in hopes of one huge long-shot return.

“I’ve always loved seeing people’s dreams come true,” Redd said in an interview. “Most of the premise of this is to help platform people, and give people an opportunity and hopefully a superior outcome.”

This spring Redd bought Olde Gahanna Schoolhouse in the Columbus, Ohio, suburb of Gahanna, and the firm is renovating it as a hub for entrepreneurs.

“It’s about the energy, and supporting people who are willing to bet on themselves,” Weaver said.

Redd has invested in and advised tech startups since retiring from basketball in 2013, and remains a venture partner for ADvantage Sports Tech Fund and a mentor with Snapchat’s Yellow business accelerator.

“The narrative had been how much the players make in the NBA; I was intrigued by who was paying us,” Redd said. “Our owners were the inspiration and motivation for me. Owning a basketball franchise was just a hobby for these guys.

“It was an interesting world. I didn’t find too many African American men in that world.”