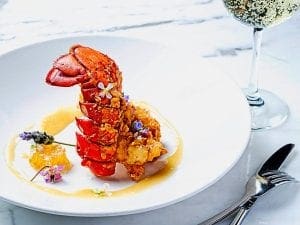 Cultured Decadence, a Madison startup specializing in cell-cultured seafood products such as lab-grown lobster meat, said it has closed a $1.6 million pre-seed round of funding.

The round was led by investors including Bluestein Ventures, Joyance Partners, Revolution’s Rise of the Rest Seed Fund, gener8tor, GlassWall Syndicate, Bascom Ventures and Dao Foods, an investment holding company based in China.

“We’ve been impressed with the team’s skill set and scientific integrity,” Ashley Hartman, a senior principal at Bluestein Ventures, said in a press release. “We’re excited to join the pre-seed round for Cultured Decadence and for the potential of their technology to transform the market for seafood. We look forward to supporting their vision to create animal-free shellfish.”

Cultured Decadence additionally received non-dilutive funding from the Wisconsin Economic Development Corp. administered by the Center for Technology Commercialization, the first cellular aquaculture company to do so, according to the release.

“This funding highlights critical progress made by Cultured Decadence and the importance of their collaborative engagement with academic and industry partners,” said CTC director Idella Yamben. “CTC is excited for their continued success as they work to scale their technology in Wisconsin.”

This $1.6 million in financing will allow Cultured Decadence to expand its team and pursue technical progress in the development of lab-grown lobster prototypes in anticipation of a commercial launch, according to the release.

Founded by John Pattison and Ian Johnson, the company launched in January 2020 after the pair met in San Francisco and began exploring a venture to tap into the alternative meat movement made popular by companies like Beyond Meat and Impossible Foods. The seafood space — a $160 billion market — was one area that was underserved, Pattison told Wisconsin Inno last year.