Inside Wisconsin: Power of undergraduate research being felt in Wisconsin economy 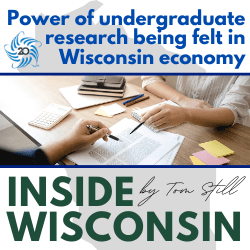 MADISON, Wis. – In April 2023, Wisconsin will host a national gathering of about 4,000 collegiate researchers who will descend on Eau Claire to present their ideas, to network with peers and mentors, and to meet with corporate and graduate school recruiters.

It’s a once-a-year gathering that illustrates just how far undergraduate research has come in Wisconsin, and what it can mean to the overall economy.

The selection of UW-Eau Claire by the National Conference of Undergraduate Research is not only a chance to highlight that picturesque region in northwest Wisconsin, but to underscore the changing nature of research taking place at “non-doctoral” campuses – and what it means to local economies in Wisconsin and beyond.

Many people are familiar with the size and scope of research at public doctoral campuses such as the UW-Madison and UW-Milwaukee, as well as private universities such as the Medical College of Wisconsin, Marquette, the Milwaukee School of Engineering and Concordia.

Less known is that faculty, academic staff and growing cohorts of students are conducting research on regional campuses where doctoral degrees aren’t offered, but opportunities to conduct meaningful work are increasingly engrained.

That is increasingly true in Wisconsin, where a combination of factors has prompted a surge in undergraduate research on UW System comprehensive campuses.

Another factor is the rise of the WiSys Technology Foundation, which is an offspring of the Wisconsin Alumni Research Foundation. WiSys has been led since 2014 by Arjun Sanga, who brought a mix on intellectual property and technology commercialization expertise to the organization.

Created in 1925, WARF handles patent and license issues for the UW-Madison, returning money to the campus research cycle and often making it possible for young companies to get a start. WiSys is doing much the same for four-year UW campuses outside Madison and Milwaukee while engaging students in research and entrepreneurism.

Recent figures illustrate the progress of WiSys, which has seen steady increases in the number of ideas submitted by researchers; invention disclosures from those same researchers; patent applications; patents awarded; and commercial licenses or access granted.

Just as important is WiSys outreach into communities that surround campuses where the non-profit organization is active. In Eau Claire, the first “VentureHome” program is connecting campus researchers, inventors and entrepreneurs with community resources and companies that can turn ideas into startup and products. Other VentureHome programs are in various planning stages in Platteville, Superior, Green Bay, Oshkosh and Kenosha.

The progress of the UW System’s non-doctoral campuses was recognized in 2020 when an independent survey ranked those 11 campuses second among the nation’s smaller research schools. The “innovation productivity” index produced by the George W. Bush Institute scored the WiSys collective behind only Brigham Young University and ahead of campuses such as Northern Illinois, Duquesne and Creighton.

The growing cooperation demonstrated on the WiSys campuses is also evident in the rest of the UW System, where interim president and former governor Tommy Thompson is encouraging more connections and information sharing. That was evident in a recent Wisconsin Technology Council webinar featuring UW-Madison Chancellor Rebecca Blank and UW-Milwaukee Chancellor Mark Mone.

A joint effort by WARF, WiSys, the UW-Milwaukee Research Foundation and the UW System will stress the importance of technology “transfer” to the economy in coming years, focusing on research strengths and how they match up with economic and societal problems.

Undergraduate researchers will help fill tomorrow’s jobs and solve today’s problems. On campuses large and small, Wisconsin is elevating that resource for others to see.