InsideWis: Amid pandemic and other troubles, parts of tech economy surging 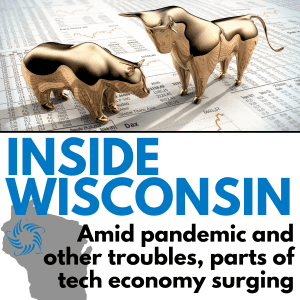 MADISON, Wis. – In most presidential election years, the marketplace for initial public offerings closes tighter than Ebenezer Scrooge’s wallet as the campaign heats up. That’s not the case in 2020, a year in which neither the worst pandemic in a century nor civil strife has deterred investors from pursuing value.

Unemployment remains high and the U.S. economy suffered a sharp second-quarter slide, but the rise in public markets such as the New York Stock Exchange and NASDAQ has been fueled in no small part by a rush to invest in tech-based stock offerings, or IPOs.

Not even the prospect of a bruising presidential election has slowed the IPO momentum, even though markets historically button up by the time the Democratic and Republican party conventions roll around.

Equity markets are crawling back to nearly where they stood before the COVID-19 outbreak began in February, and tech stocks are trading at highs not imagined five months ago. Apple just became the first company in history to hit a $2 trillion market cap.

On NASDAQ, which has been home to about three-fourths of IPOs of late, there were 69 such public stock offerings in the first half of 2020 alone. Many were tech-related as investors look for value in venture-backed companies in artificial intelligence, software, telemedicine, education tech and other sectors that have shown signs of shaking off the effects of the COVID-19 pandemic.

An initial public offering by Jamf, which started in Eau Claire and now boasts offices around the world, was well-received when it hit the NASDAQ exchange in late July. The company has long offered management of Apple-based business and education software, and that’s even more in demand as organizations accelerate their digital transformations.

Analysts were predicting zero IPOs in late 2020; they’re now expecting 15 to 20 in the tech space alone.

“Technology companies are an economy of their own. Tech levers and scales everything,” said Jay Handy, a Madison-based financial advisor. “The COVID-19 situation has accelerated technology trends that we’ve been talking about for decades…”

The question is whether the action at the top of the market will transfer into increased activity below, where almost all young tech companies are backed by friends, family, angel investors, venture capitalists or their own hard-earned revenue.

Most startups were prepared for a full investment crash when COVID-19 hit the economy hard in late winter, but many have weathered the storm as they learned their services are still needed in an economy in transition. In cases, those services are more pertinent than ever.

Startups raised a reported $34.3 billion nationally in the second quarter of 2020, down from $36 billion in the same quarter a year earlier. However, the bulk of that cash likely flowed to companies that were existing portfolio companies for angel or venture investors, and which were showing revenue from sales.

For those startups not already in the door and which are still pre-revenue, it may be a different story.

“It gets dicier the farther down a young company is in the food chain,” Handy said.

Still, deals are happening in Wisconsin and elsewhere. There were 123 angel and venture deals in Wisconsin in 2019, according to the Wisconsin Technology Council’s “Wisconsin Portfolio” report, and nearly 50 by an informal count at the mid-point of 2020.

One of the reasons IPOs are so important is that founders and investors finally get paid for their years of hard work and patience. That generates wealth that is plowed back into the economy in a variety of ways. One route is reinvestment by those investors and entrepreneurs into a whole new crop of startups, which renews the cycle of innovation.

The COVID-19 pandemic isn’t finished transforming the U.S. and world economies, but for now, the markets appear to be recognizing and rewarding those products and services that are adapting to the “new normal.” Let’s hope the benefits flow downstream to the next crop of tech entrepreneurs.