InsideWis: Even in fractious times, the need for a vital, secure economy can unite lawmakers 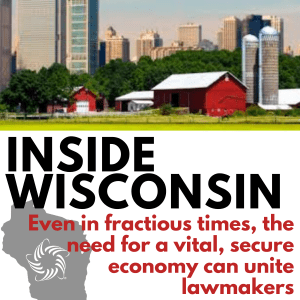 And yet, when it comes to the intertwined issues of economic and national security, Gallagher and Khanna are models of what congressional policy debate should look like in an era of partisan divisiveness.

They are the leading House sponsors of “The Endless Frontier Act,” (H.R. 6978 and S.3832), which would spend up to $100 billion over five years to boost science and technology research, revive American manufacturing and create innovation hubs nationwide. While much needs to happen before the bill becomes law, it has already sharpened national discussion about U.S. tech and manufacturing primacy in the 21st century.

Both elected in 2016, Gallagher and Khanna met during a freshman orientation meeting in Washington, D.C. They hit it off, not because they agree on every issue, but because they’re passionate about jobs and economic growth and the threats posed by other nations, especially China, to U.S. interests.

“It always makes me nervous when Ro starts talking and I find myself vigorously nodding my head,” Gallagher joked during a Wednesday webinar on the proposal.

Khanna, Gallagher, UW-Milwaukee Chancellor Mark Mone and Melissa Skala, a researcher in the Morgridge Institute for Research in Madison, talked about the elements of the bill and why it’s important during the hour-long webinar. What emerged was a consensus that research and development matters – and it can’t all be clustered in a few hotspots.

“It’s wrong for all of the innovation dollars … to be going to a few places,” said Khanna, whose Silicon Valley district is home for some of the nation’s biggest tech companies and the lion’s share of U.S. venture capital investment. Still, he thinks his district will be better off in the long run if innovation and production resources are more dispersed … and national security will improve, as well.

Khanna said the bill aims to “make sure America leads innovation, and that we don’t allow China or other countries to lead.” He proceeded to tick off Wisconsin and Midwest resources like a Badger state native, emphasizing manufacturing expertise and the need to preserve middle-class jobs here.

That got no argument from Gallagher, who noted the COVID-19 crisis has exposed “how brittle our supply chains are” and how dependency on other nations for manufactured goods brings with it a whole set of security problems.

“People are waking up to the scale of the challenge we face. It’s going to require people to reach across the (partisan) lines,” Gallagher said.

The act envisions partnerships between universities, government and industry, with 10 interdisciplinary research hubs to transfer science and technology into innovative goods and services while boosting metro, state and regional economies.

Both Mone and Skala addressed the importance of such partnerships, with Skala likening the relationship between research and production as being akin to “a mine and a mill.”

“A mill won’t last long if there is no mine, but a mill is required to get the products to the market,” Skala said. “What I find so powerful about the Endless Frontier Act is that it supports both the mine and the mill to benefit innovation across the spectrum.”

That notion of a partnership between research and innovation was echoed by Gallagher, who said the bill can build on Wisconsin’s “fundamental strengths as a state.”

“I think we need to think hard about how we revitalize and modernize the Wisconsin Idea, and so the Endless Frontier Act would be one part of that. We really have an opportunity right now… Wisconsin could position itself, if we got our act together, to be a destination of choice for a lot of top-level talent, he said.

Gallagher, Khanna and others in Congress have outlined a vision through the Endless Frontier Act. Let’s see if our fractured political times can bring it into sharper focus.