InsideWis: Even in harsh partisan climate, some essential work gets done 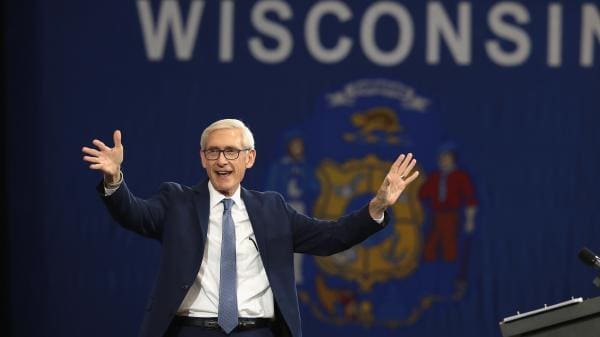 MADISON, Wis. – The partisan divide between Gov. Tony Evers and Republican leadership in the Wisconsin Legislature has been the stuff of headlines, from the rare rejection of a Cabinet secretary nominee to disputes over gun control and a tug-of-war over “lame-duck” laws passed before Evers took office.

And yet, the average observer might think a Thanksgiving truce had been called at the family table by counting heads at Evers’ recent bill-signing ceremonies.

From E-bike regulation to drunk driving penalties, from providing benefits to the spouses of fallen law enforcement officers to making vaccines more available, and from suicide prevention strategies to ending the Miller Park sales tax in southeast Wisconsin, dozens of bills passed the GOP-led Legislature this fall and wound up on the desk of Democrat Evers.

Republican and Democratic legislators alike showed up for many of the signing ceremonies, as did hundreds of people who worked to pass the bills or who supported the outcomes. Assembly Speaker Robin Vos, the Republican who has clashed as much as anyone with Evers since the governor’s 2018 election, wrote recently in his newsletter that 28 bipartisan bills cleared his house and were sent to Evers.

“I take pride in the fact that in the Legislature, we’re working together to address important issues in our state,” Vos wrote.

Amid the sound and fury over some major issues, there can be consensus on others. In fact, that’s been the pattern in the Legislature since 2012, according to official records. Through the spring of 2018, well over 90 percent of the 1,200-plus bills passed by the Assembly and Senate have garnered bipartisan votes. The lowest bipartisan approval rate for any one house was 89.5 percent in the Senate in 2011-2012.

That bipartisanship was reflected in two bills, passed by strong margins in the Legislature and signed into law by Evers in November, that are important to the state’s emerging tech sectors.

Assembly Bill 38 streamlines the process by which faculty-led startups are reviewed for possible conflicts of interest. Under current law, any contract exceeding $250,000 over two years and tied to a faculty or staff entrepreneur must receive a 45-day “review” by the UW Board of Regents. This is the case even when the relationship was reviewed previously. This Regents review slows down the process without adding value, costing young companies time and money at a critical point. The companion bill was Senate Bill 42.

Dubbed the “Mark Cook Bill” in honor of the late Dr. Mark Cook, who started several tech-based companies during his tenure at UW-Madison, will eliminate the 45-day delay. It will substitute a process to require management plans for addressing financial interests. While UW-Madison already employs management plans to meet federal requirements, the management plans will now be required by state law.

Senate Bill 208 clarifies Wisconsin’s Act 255 investor tax credit law by matching language pertaining to how the credits can be used, especially by insurance companies that may invest in young companies. Assembly Bill 225 was an identical companion bill.

Act 255 permits a taxpayer to apply the tax credit against several types of tax liabilities. When this bipartisan law took effect in 2005, credits could be applied to corporate income taxes, individual income taxes, and trust income taxes. These are three different sections of state law. In each section there is identical language about how the credits can be used.

In 2009, the Legislature added gross premium taxes to the credits list, which are a tax on insurance premiums akin to a sales tax. Because language from separate 2009 bills did not match, uncertainty arose over time about how credits could be applied to gross premium taxes. Senate Bill 208 will tie up the loose ends without an adverse fiscal effect.

Partisan debate is a necessary and valuable part of the legislative process because ideas should be fully vetted before becoming bipartisan law. That happens every day in the Legislature, where 10 ill-crafted bills never see the light of day for every solid proposal that passes.

Still is president of the Wisconsin Technology Council, which supported AB-38 and SB-208. He can be reached at tstill@wisconsintechnologycouncil.com.