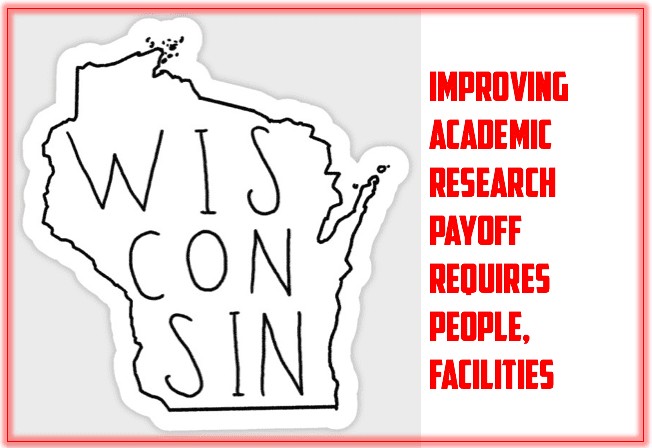 MADISON, Wis. – By some standards, Wisconsin is a leader among the states when it comes to academic research. Its public and private colleges and universities attract as much as $1.7 billion per year in merit-based grants and contracts to study and provide solutions to society’s most pressing problems.

In other ways, Wisconsin is not a model for how academic R&D should work. State government support for basic research has historically been low, and public universities in other states have far more freedom to build needed laboratories and to pay star faculty.

The result is a conflict of expectations: Wisconsin colleges and universities with R&D depth are sometimes accused of not doing enough to launch startup companies and products – and those same institutions respond by saying state policymakers are standing in the way of their own goals.

That was a theme of several recent gatherings of Wisconsin researchers, business leaders, investors and policymakers in Madison and Milwaukee. Those meetings provided a glimpse at problems that appear to be holding back the state’s potential to capture more economic growth from its R&D foundation.

Speakers agreed that talented people, the right facilities and real-world connections are necessary ingredients for a more productive research and development climate. Some specific suggestions:

Find ways to attract and keep talented researchers: A few years ago, University of Wisconsin System schools were being “poached” by other universities that tried to take advantage of budget cuts and the perception that UW tenure had been eroded. As UW-Madison Engineering Dean Ian Robertson told members of his advisory boards Oct. 19, the tide has turned. More young professors and researchers are being recruited at his college.

“We’re starting to see those people bring in resources that will change the research enterprise,” said Robertson, whose College of Engineering already brings in about $120 million in research grants each year. Some of that money is the result of industry partnerships with companies such as Qualcomm, Sub-Zero Wolf, Plexus, Rockwell Automation and Kohler.

The latest example is the Foxconn Technology Group, which will spend $100 million over time to help build a new engineering building and to conduct joint research in fields such as mobility, sensors, applied data analytics, materials science, robotics and medical devices.

Build first-rate facilities cheaper and faster: Within the UW System, chancellors have repeatedly complained about the lack of maintenance dollars from state government and a Byzantine approval process, dating back over decades, that doubles the time it takes to build a campus facility.

“Ten years” was UW-Madison Chancellor Becky Blank’s two-word answer when she was asked how long it takes, from concept to construction, to build something big and new on campus. She noted the UW-Madison is the only major public or private university in the United States that does not have its own bond rating for construction borrowing, as all projects must run through state government. That’s true even if a new building is financing primarily through donations.

“The constraints I have on capital projects are unprecedented compared to any of my peers, and almost unworkable at this point in time,” Blank told an Oct. 16 meeting of the Tech Council Innovation Network in Madison. “I’m really, deeply worried… I despair at times as to whether we will be able to do what we need to do as a 21st century institution.”

A similar message was delivered at a Oct. 12 WisPolitics.com luncheon at the UW-Milwaukee Innovation Accelerator, where engineering professor Deyang Qu talked about the importance of recruiting young talent by offering top facilities.

“Lots of our infrastructure is really aging,” Qu said. “State money invested in those (facilities) will be doubled or tripled, I think, in returns” because they will be more efficient and attract and retain top talent.

Foster better industry connections: While many colleges and universities are skilled when it comes to winning federal or private foundation grants, they are less adept at making industry connections. Some colleges and universities in Wisconsin are trying to change that by working more directly with businesses that have research needs that translate into commercial products.

Marquette University is a leading private college example, while UW-Milwaukee and UW-Stout are examples of aggressively pursuing industry research on the public side. At UW-Madison, the College of Engineering is also making progress, as demonstrated by the Foxconn grant, and the transformation of the Department of Computer Sciences to a school with more faculty will also help.

“We’re not the job creators; we’re not the ones doing the research, but what we can help with is the climate,” State Sen. Alberta Darling, R-River Hills, told the WisPolitics luncheon. “We have to create a better climate for those connections.”

Wisconsin’s R&D foundation is substantial. It can only improve with better partnerships.