MADISON, Wis. – As a study by the nation’s largest computer technology association affirmed this month, Madison is one of the top “tech towns” in the United States. It ranked 14th on a list of 20 cities, mostly much larger metros, released by the Computing Technology Industry Association.

But what about the rest of Wisconsin? How does it fare when it comes to building a more vigorous, tech-based economy?

If the diverse group of companies selected to pitch at November’s Wisconsin Early Stage Symposium is any indication, the rest of the state is moving in the right direction.

Ten of the 24 presenters that will take the stage Nov. 7 at Madison’s Monona Terrace Convention Center hail from Wisconsin cities outside Madison, compared to nine from the city itself.

They include communities such as Milwaukee, Sheboygan, Baraboo, Viroqua, Plover, Eau Claire and Appleton.

Five other presenters making five-minute pitches Nov. 7 hail from other states – Illinois, Iowa and North Dakota, and were drawn to Wisconsin by the scale and reputation of the investor conference.

In the Elevator Pitch Olympics, a conference staple that takes place Nov. 8, the pattern is much the same.

Seven of the 16 young companies that will deliver 90-second pitches to a panel of investor-judges are from Madison. Seven others are from communities such as Milwaukee, River Falls, Whitewater, Menomonee Falls and Oak Creek. Two are from neighboring states.

In addition to that geographic spread, the companies selected come from a mix of tech sectors – from agriculture to water technology, from financial tech to manufacturing, and from artificial intelligence to health tech.

Each company was selected from a much larger pool of applicants by a steering committee for the event, which dates to the early 1980s and has been a part of Wisconsin’s tech investing scene ever since. Most of steering committee members live and work in the Madison area, but their choices reflected the fact that solid companies are springing up across Wisconsin. 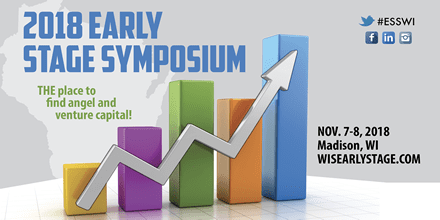 The Oct. 23 CompTIA report was designed to help information technology workers, whose skills are in high demand, make educated choices about where to live and work. Factors included compensation, cost of living, number of open IT positions and projected job growth over time. No. 1 on the list was Charlotte, N.C., which is a rapidly growing mid-South city.

Madison was one of seven “college towns” that showed up on the CompTIA list, which included Raleigh, N.C. (No. 2), Austin, Texas (3), Lansing, Mich. (13), Durham-Chapel Hill, N.C. (15), Boulder, Colo. (19) and Colorado Springs, Colo. (20). Tech powerhouse cities such as San Jose, San Francisco, Seattle and Boston made the list, too, but the rankings reflected the fact that housing and other costs can make living there more challenging.

It wasn’t the first time Madison was mentioned in a tech survey, nor will it be the last. Madison ranked as the third-fastest growing technology employment market in the nation in 2017, according to a recent report from commercial real estate firm CBRE Group Inc. The city was also ranked No. 1 nationally by CBRE for its concentration of millennial workers, and No. 2 nationally by the Brookings Institution for the percentage of college graduates among millennials.

Madison’s place in CompTIA’s top 20 tech towns study speaks well of Wisconsin’s capital city, but it also opens the door to greater attention for innovative young companies in other parts of the state.