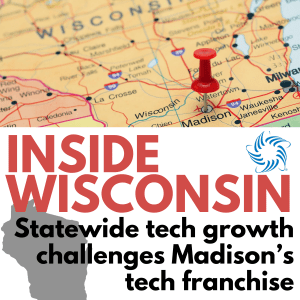 MADISON, Wis. – For the better part of three decades starting in the 1980s, Madison was the only game in the state when it came to starting and growing tech-based businesses.

That’s no longer the case, for a variety of reasons that are good for Wisconsin’s overall economy and potentially challenging to its capital city.

Examples of success in Wisconsin’s non-Madison tech economy are growing.

None of this would come as a surprise to John C. Austin, a research fellow at the Chicago Council on Global Affairs and the Brookings Institution, and a long-time student of the Midwest’s continuing transition from “rust belt” to “tech belt.”

Austin spoke during an Aug. 11 webinar, produced by the Wisconsin Alumni Research Foundation and others, on assets, opportunities and challenges for the region. A follow-up webinar in the “Shaping the Endless Frontier” series will be Sept. 16 to dive into the details of a bipartisan federal bill that could enhance investment in science and technology.

Austin said the Midwest is well-positioned in seven sectors driven by technology – water solutions, data analytics, energy solutions, food systems, transportation and mobility, health and bioscience and advanced manufacturing. Austin also cited the abundance of research centers, both private and academic. He noted that Midwest cities, particularly mid-sized cities like many in Wisconsin, may benefit as people make lifestyle choices and leave “global city hothouses” in response to COVID-19 and more.

That’s not to say the region is without drawbacks – infrastructure, rural broadband gaps, retraining needs and segregated metropolitan areas. However, Austin said, the region still has more plusses than minuses.

“When we put our innovation smarts together with many place-based assets, Midwestern communities can lead the way and thrive anew,” Austin said.

The Madison area will continue to lead in tech-based development in many ways. However, there’s more competition within the state and recent images of the city as a place beset with violence and vandalism don’t help, especially when it comes to attracting investment. People have choices. Increasingly, some of those choices are elsewhere in Wisconsin.