InsideWis: Wisconsin’s growing reputation as COVID hotspot not good for business – or anyone 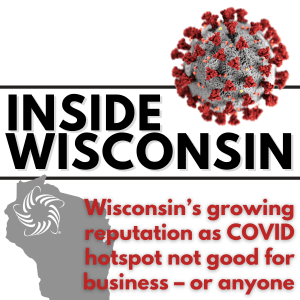 NEKOOSA, Wis. – In this part of central Wisconsin, where five counties lie within a few minutes’ drive in any direction, the COVID-19 pandemic still seems far away to some people.

To be sure, most residents encountered on the streets practice social distancing and wear masks when they’re in closed spaces. However, it’s still possible to frequent a tavern, restaurant or store where employees aren’t universally masked and patrons aren’t spread six feet apart.

And why not? With infection rates hovering between 12 and 20 per 1,000 people and deaths at six or fewer in Adams, Juneau, Portage, Waushara and Wood counties, it is easy for residents to believe they’re relatively unscathed.

That COVID-19 bubble may be on the verge of bursting.

Wisconsin’s COVID-19 numbers have been heading in the wrong direction over the last month. Positive tests are up, even as a percentage of total tests; hospitalizations have increased; deaths per day have climbed to a rate not seen since around Memorial Day; and hospitals are reporting declining stockpiles of personal protective equipment.

While some public officials were quick to blame the return of college students to campuses statewide, that doesn’t explain the surge in most of northeast Wisconsin, where even the most rural counties – Florence, Forest, Oconto and Marinette – are reporting between 25 and 33 cases per 1,000 people.

Something else is driving the infection rate other than students with the audacity to continue their education. It’s also unlikely that bars and restaurants are the prime culprits, as most smart owners and managers have learned how to run a clean establishment or risk going out of business.

No less a publication than The Atlantic has declared Wisconsin a COVID-19 hot spot, noting the state had “crashed through its own coronavirus records” with a tripling in positive cases and a doubling of hospitalizations. “It now ranks among the top states in new cases per capita, according to the Centers for Disease Control and Prevention, and it is reporting more new cases, in absolute terms, than all states but California, Texas and Florida,” the Sept. 26 story read.

Reporter Robinson Meyer wrote that Wisconsin experienced a college student infection spike like many other states, but the pattern is now very different. “Cases are popping up in too many places, and among too many different age groups, to be blamed on college kids. In fact, every age group except 18-to-24-year-olds has seen cases rise this week, according to official data,” Meyer wrote.

So, what is behind the Wisconsin surge? Here are some possibilities:

Wisconsin does not benefit from being called out in national publications as a place where COVID-19 is unchecked. Elected politicians, business leaders and public health officials need to stop talking past one another and begin discussing solutions that will keep Wisconsin healthy without cratering its economy.